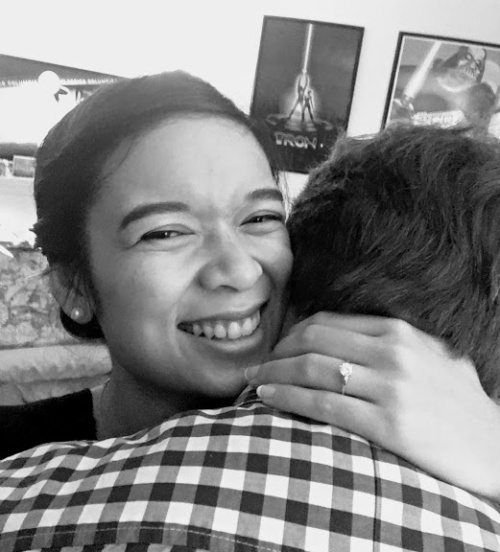 When people ask for our proposal story, I always feel a little weird about telling it. Not only because I have repeatedly told Keith throughout our relationship that I didn’t want a proposal or a ring, but also because I want to counter-ask “How much time do you have?” I mean I can tell you the story of how a couple months ago, we both decided that it was time for us to upgrade from our civil union/common-law status to marriage. Since his family was coming for Christmas to meet my mom, it was the perfect time to tell them the happy news. We were going to have dinner at the hotel where his family was staying at, but after having a less-than-satisfactory Christmas meal there, we decided to just have a low-key night at the pub across our apartment where we go for half-price wings every other Tuesday. It just so happened to be Tuesday that night and the server who had been with us since we started our wing nights was working. He overheard the news so he brought over a complimentary bottle of bubbly to celebrate the occasion. Our families were super supportive and they were getting along so splendidly that I hated having to break up the conversation to go to work the next day. Keith and I could not have asked for a better night.

But then it became even more special when Keith’s mother brought over his grandmother’s engagement ring in case Keith had wanted to give it to me. I feel very honoured that she would even consider me family enough to let me wear her mother’s ring. So on New Year’s Eve, Keith ordered sushi from our favourite sushi place and picked out a great bottle of champagne with a label that matched my Tiffany blue kitchen.

We had a lovely dinner and sat down to watch An Affair to Remember, which was not only one of the first movies we had watched together, but also starred Deborah Kerr. Keith’s grandfather met the actress when he was a shoe salesman in Hollywood, the same grandfather who had bought the engagement ring for his grandmother. I left the room after the movie and when I came back Keith was on his knees, frantically looking under the couch claiming he “lost it”. My concern and irritation quickly turned to relief and joy when it turned out that obviously he had the ring all along. For all my reservations about the one-sidedness of proposals and absurd cost of engagement rings, I could not help but say “Yes, of course!” when faced with the love of my life on one knee asking me to stay committed forever. Then we drank more champagne, ate macarons which he remembered to get since I love them and watched the countdown.

That’s the short version of our proposal story. The truth is that Keith and I have actually been proposing to each other for the past seven years. He proposed to me the first night we met, at a viewing of How I Met Your Mother’s 100th episode, when he made a Tim Gunn reference that only I got. I proposed to him a month later when I asked him if we could define our relationship status before I left for spring break. We proposed to each other when we entered into a civil union one year after dating then moved in together. He proposed to me by picking up the slack when I had just graduated and couldn’t find a job for months. I proposed to him when I told him it was his turn to pursue his dream career and my turn to take care of the bills. He proposed to me when he adopted a rescue dog without my knowledge. I proposed to him by accepting to keep said rescue dog and it’s been one of the best decisions we’ve ever made. We propose to each other every time we support one another, make up after fights, forgive each other’s mistakes and celebrate one another’s accomplishments. And I am so glad we will get to keep proposing to each other until the wedding (whenever that will be) and  that we will continue to do so long after.

3 responses to “Our Proposal Story”